The average daily (per day) consumption of visible fat among vegetarians in these metro cities was 40.4 grams per day while the non-vegetarians consumed just 30.1 grams per day

Hyderabad: A popular belief is that people on non-vegetarian diet tend to have fatty deposits in their body, making them lethargic, while vegetarians with their plant-based diet end up leading fulfilling and enriching lives.

Such popular narratives, however, when tested against hard scientific data, could end up surprising one and all.

Among the seven metros, Hyderabad, despite being well-known for its non-vegetarian delicacies, had the lowest intake of visible fat (25 gms per day) while Delhi (44.4 gm) and Ahmedabad (43.9) were the highest. The visible fat intake in Mumbai was 28.4 grams per day while in Bengaluru it was 30.9 grams and Kolkata 37.3 grams. The overall consumption of visible fat was also higher in the literate population than illiterate population in the seven metros.

Overall, the average daily intake of visible fat among urban population of the seven metro cities was 33 gm per day, which was higher than the recommended levels of ICMR, which is about 22 gm per day. In all, 18 per cent of the total energy intake was obtained from visible fats. 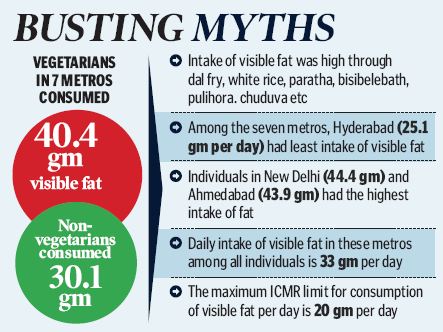 Now you can get handpicked stories from Telangana Today on Telegram everyday. Click the link to subscribe.